Noun Definition And Examples In Urdu Kinds Of Noun

The first and the most important part of speech is “Noun” and here you will learn noun definition and examples in Urdu kings of noun. The word noun comes from the Latin word Nomen which means “Name” of any person, place, animal, or anything we can touch or we can’t touch. Whenever we are making a sentence there is must be a noun in it which you have to use properly to make a proper sense of your sentence. Such as, “Ahmed is running”; in this sentence “Ahmed” is a name and this line is making a proper sense about a person who is running and his name is Ahmed. But in case if we just write “he is running” then there is not any noun is used. Moreover when we said that “Ahmed is traveling to Karachi”; we used two nouns in this line that are “Ahmed” and “Karachi”. So keep remember that he, she, it and I, we, they and you are not a noun. Your concept about what is noun would be clearer by reading the following exercise of noun in Urdu.

Noun Definition And Examples In Urdu Kinds Of Noun 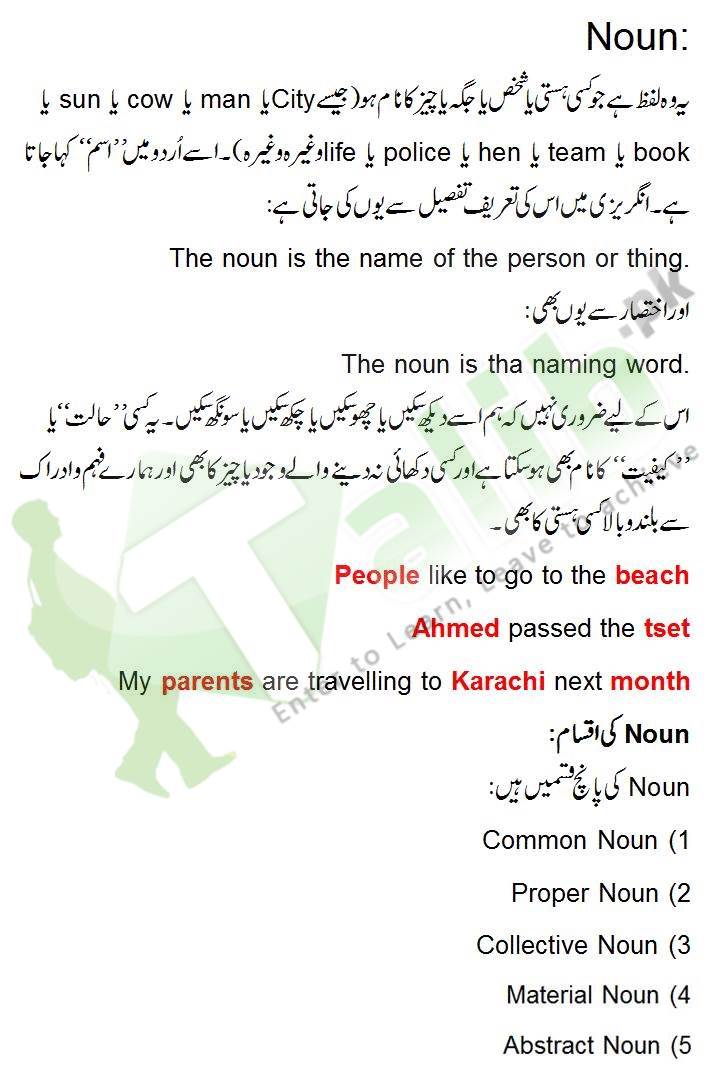 There are total 5 types of noun that used in to the parts of speech which is used to express the different conditions. You can click on any of these to get details.

(You can Click on The Name of Type To Open It)

So this is noun definition and examples in Urdu kids of noun and you have seen that the noun is the name of person or thing, or you can also define noun as the noun is the naming word. Noun could also be a thing that we can’t see like air or angels. So I am hoping that your concepts about noun are good now and you can utilize any noun in your sentence in any condition of tense like present, past, and future. Use Of Is, Are, Am In English Grammar In Urdu With Examples

Vegetables And Fruits Names In Urdu And English